I don't really know what to say, so I'll just say something that maybe will help others.

I'm happy about reader. But more than that, I'm proud of it growing into what it is.

reader started as a hobby and learning project, scratch-your-own-itch kind of thing. Starting off, I had two goals: it should be a library, and it should be for the long term.1

It continued beyond that, into an experiment.

First, on applying Pieter Hintjens' problem-solution approach, and the ideas in the Write code that is easy to delete, not easy to extend and Repeat yourself, do more than one thing, and rewrite everything essays by tef of programming is terrible.

Second, and more mundane, it was an exercise in how testing and type checking keep code maintainable over time. "Everyone knows" they are good things™, but most jobs rarely emphasize the over time part – I know mine at the time didn't. I wanted a place where I could get an intuitive feel for it.

(If you'd like to read more about any of the above, do let me know.)

Judging the success of either is probably highly subjective. Nevertheless, I think they were both wildly successful. reader is still alive and kicking, despite the limited time I have for it, and I've developed habits and ways of solving problems that I'm constantly using in my professional life.

Sure, reader has flaws, and it's definitely not done (what is?), but it's the longest project I've ever worked on, and probably the best code I've ever written.

Finally, I feel I have to say that while not hugely popular, reader is way more popular than I could've dreamt 5 years ago, especially for a niche, but hopefully still relevant topic like web feeds. Thank you!

Here are the highlights since reader 3.0.

The parser internal API is fully documented. It continues to be unstable, but this is a huge first step on the road to internal API stabilization.

I started with the parser because it's probably most useful for plugins (for example, the Twitter plugin uses it extensively), or if you want to retrieve and/or parse feeds with reader, but handle storage and so on yourself (here's a recipe for parsing feeds retrieved with HTTPX).

The time from process start to usable Reader instance is 3x shorter, by postponing update-related imports until actually needed.

When sorting by recent, newly added entries now always appear at the top, regardless of their published date, except on a feed's first update.

This replaces a more complicated heuristic that caused entries added to a feed months after their published (yup, that happens!) to never appear at the top (so you would never see them).

reader is a library, so I try to keep the number of dependencies as small as possible.

Starting with 3.1, the readtime built-in plugin has no dependencies, and it can be used even if lxml is not available (the library I was using before to calculate read time has a transitive dependency on lxml, which does not always have PyPy Windows wheels).

There were lots of bug fixes, mainly to plugins (I guess that's a good thing).

That's it for now.

reader takes care of the core functionality required by a feed reader, so you can focus on what makes yours different. 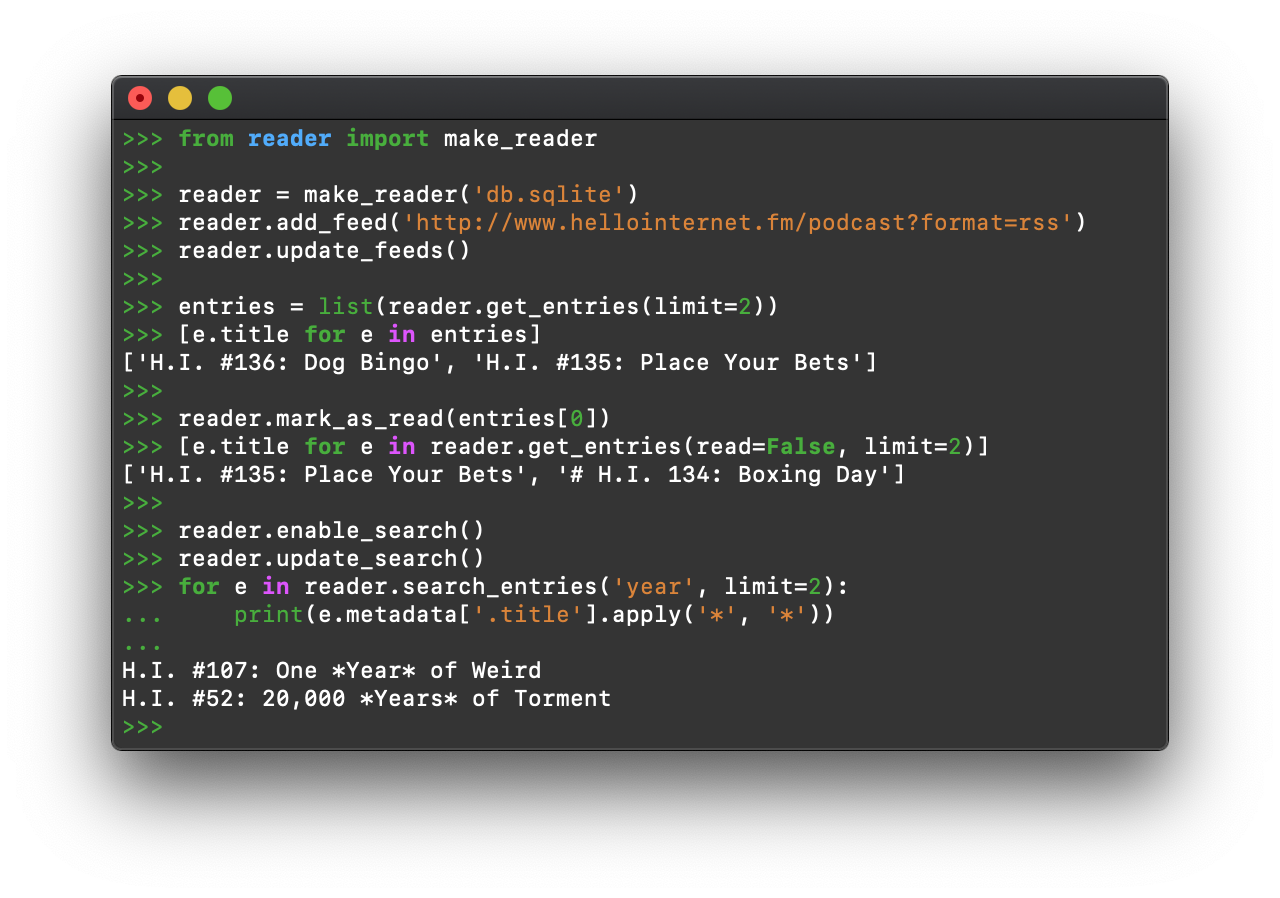 reader allows you to:

To find out more, check out the GitHub repo and the docs, or give the tutorial a try.

Why use a feed reader library? #

Have you been unhappy with existing feed readers and wanted to make your own, but:

Are you already working with feedparser, but:

... while still supporting all the feed types feedparser does?

If you answered yes to any of the above, reader can help.

Why make your own feed reader? #

Obviously, this may not be your cup of tea, but if it is, reader can help.